What is macular degeneration?

What is macular degeneration? Age-related macular degeneration (AMD) is a condition which affects the retina, the light-sensitive membrane at the back of the eye. As we get older, we develop an accumulation of waste material underneath the retina. This accumulation can affect the function of the light-sensitive cells, known as photoreceptors. Initially, people can start with very little, or no accumulation of waste material. However, when we get older, more of this waste material (drusen) builds up under the retina. This build-up is worse in some people than in others, and this leads to the light-detecting cells losing the ability to detect light accurately.

Early AMD doesn’t always cause symptoms but as the condition worsens people notice that their vision lets them down in dark or dim environments or when reading print in a newspaper. This phenomenon is because the light-detecting photoreceptors start to struggle to detect light and become less sensitive in detecting light once AMD develops.

There is another form of advanced or late AMD in which new, fragile blood vessels grow and bleed below and into the retina leading to a more rapid loss of vision or symptoms of symptoms of distortion, with images looking misshapen, or bent. This condition is known as wet AMD.

We are only beginning to understand some of the changes which happen in AMD and why some people develop AMD more rapidly than others. Even though age is the most significant risk factor for developing AMD, we know that some lucky 90-year-olds don’t have AMD and yet there are much younger people, perhaps in their 50s or 60s who do have AMD. This means that age is not the only risk factor for developing AMD and that other factors are at play. One such factor is genetics.

Researchers have found that genetic factors may explain as much as half of the risk of developing AMD. Patients inherit genetic factors in complex ways as there are at least 19 different genes which can either increase or decrease the risk of developing AMD. Some of these genes relate to the way our immune system is regulated and others seem to determine how the body transports fat (cholesterol).

Lifestyle changes for those with AMD

The biggest modifiable risk factor for AMD is smoking, so it is crucial that people who have developed AMD or are at high risk of developing AMD don’t smoke or stop smoking.

A diet rich in leafy green vegetables such as kale, spinach, broccoli or other coloured vegetables (sweetcorn or coloured peppers) may help reduce the risk of the development of AMD. The role of vitamins and mineral supplements in preventing AMD is a source of debate though particular combinations of vitamins and minerals may be helpful in reducing the risk of wet AMD when a person has already developed advanced or late (wet or dry) AMD in one eye. There remains no cure or treatment for dry AMD and no targeted, effective treatment to prevent drusen (early AMD) developing into wet or dry advanced, late AMD.

Maintain vision after 40 with regular checks

Many people don’t catch vision loss until it’s too late. If you’re over 40, avoid unnecessary vision loss by having a VisionSafe Eye Check on a regular basis. Book one today.

About the Author: Praveen Patel

I am a Consultant Ophthalmologist at the Hertfordshire Clinic. I am actively involved in research to find novel therapies for macular disease including age-related macular degeneration and offer access to latest treatments including Eylea, Lucentis, Avastin and steroid injections for macular disease.

Get the VisionSafe Eye Guide 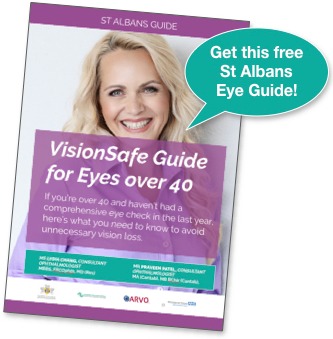